Electromagnetic Pollution & What We Can Do About It

EMR (electromagnetic radiation) and EMF (electromagnetic frequency) are virtually saturating us, every day. Those of us that are urban or suburban dwellers, living with the comfort and convenience of appliances, electronics and smart devices, are inundated with these frequencies. The emissions from these devices and appliances are unnatural electromagnetic energies. Personal computers, mobile smart phones, Bluetooth, laptop, refrigerator, microwave….the list goes on and on.

Both types are invisible, and both types have an effect on living organisms. Our domestic and farm animals, plants, oceans, sea life, wildlife and ourselves are affected by this unseen pollution. We have ways to measure unnatural electromagnetic frequency using a Tesla meter measuring device. We have used one in the past with success, while

demonstrating the negation of the effects of a microwave cooking a potato, and posted a video to Facebook at that time. Long gone is our Facebook account, which I didn’t find helpful in business and rather too much of a distraction. I have the video, but I can’t post it here for “security reasons” which is a bummer, but, I was able to take some fascinating pictures of how orgonite, specifically Orgonyx, changed my aura completely just within two minutes of holding the piece.

First we took pictures of my aura without holding the device. 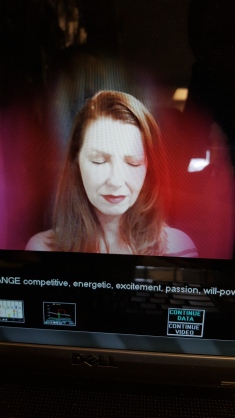 A picture taken without holding an Orgonyx Orgone Device

I was consulting with clients at the fantastic Celebration Store in Colorado Springs. We had a few minutes before my next appointment, so I asked that the wonderful staff help me conduct an experiment. They have a fancy aura reading station; it involves a laptop, digital camera and a giant mouse for the left hand. The fingers align with metal buttons that are sensors to read energy in various ways. Heat, stress levels, electric energy, etc, are detected and fed to the computer, where the software translates the information into energy readings.

As a reader, there are certain things we can expect to see in the aura; indigo and violet indicate third eye activity and crown chakra connection and activity. There is always orange and red in my aura as I am a Leo, and very much resonate with the root chakra energy. But as a reader, and an intuitive empath, I am trained to activate and ground my energy, particularly when I am working, as I was the day we did this test.

Chakra activity during the first part of the experiment.

The store carries my art, and so we had some devices to choose from. I chose the one pictured below, cast this last moon, July 2017. It holds a medium size clear quartz crystal, in a silver star metal matrix. A tiny silver ring with a butterfly sits atop the crystal, and it is nestled against a small piece of bismuth. This is a lovely, gentle device, and although it is small, you can see it packs quite a punch. The overall change takes about three minutes of holding and meditating with the device. 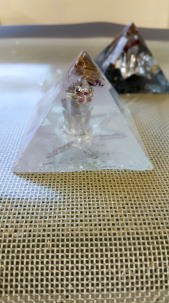 This is the device that I held during the second part of the experiment.

While my heart is surrounded by it’s own aura in the first set of pictures above, it is much larger and stronger in the second set, and the chakra area is registering more activity.

This is fascinating to me, as is the act of art with orgonite as my medium. These are my crystal friends and when I work with them, after four years of doing the same casting (as many moons as weather has allowed), I find that the working to infuse the positive intention into these devices has become deeply personal, and an act of renewal and joy for all of us involved. (Yes, I consider crystals to be beings in their own right). After about three minutes of holding the device, this was the result. The white aura is a rare reading, according to the staff who witnessed the experiment. 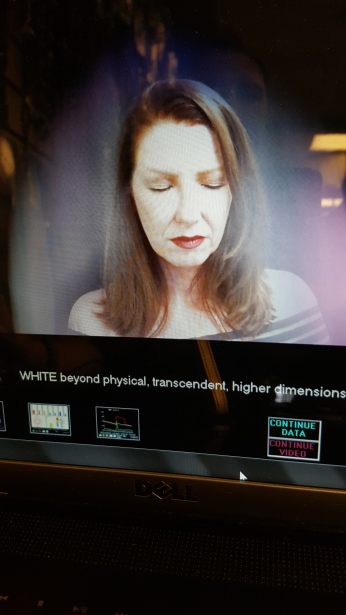 I’ve always known they hold a special charge, not just because of their extraordinary EMF battling power, but also the way the energy soars and sings when a person interacts with them.

Orgonyx Orgone Devices use crystals in a most loving way; we give them a beautiful home, surrounded by a matrix of resin that will keep the device working and pristine for a very long time. I feel as though I am in a sense rescuing these friends. I change their reality and give them a positive purpose to fulfill. I invite them to participate and that I think is the key.

Give them a choice, since they have no legs to stand on, or get up and walk away. It is a beautiful thing to acknowledge the life form that is a crystal and watch how it then responds to you. This makes sense to me in a profound way. Crystals have been misused in times past; distant and ancient times saw them used to destruction and ruin. They have since taken steps to defend themselves,  so their powers became dimmed to us, unless we worked to tap into the abundant energy and information within them.

Those of you that own Orgonyx Orgone Devices, can consider them a diary and friend. A place to put your cares to be kept for you until you are ready to deal with them. They can be a confidant, a counselor and a helpful ally. Quartz offers a beautiful frequency that is constant, unchanging and powerful. The crystal itself, at its molecular level, is the exact pattern as the flower of life. The earth’s Schumann resonance has been spiking for the last few weeks, and astronomy promises an exciting second half of the year. Astrology suggests this is a time for “inner-standing”, for diving deep within and using this time to grow in spirit and character. There are tumultuous times ahead, and rumblings of conflict and strife. It seems that the entire world is on edge since the last US election.

To really recharge your own life energy, get away from the bustle of the noisy city, find a quiet and beautiful place to sit with nature.

Grand Canyon –  in July 2016 we walked the western edge…it was astonishing in sheer magnificence. Pictures can’t possibly do it justice…

Leave the electronics behind, and listen to the subtle sounds of Mother Earth. Meditate on a strong aura, on building a defense against EMF and EMR pollution.

You can ask crystal friends to help you heal, relax, meditate, ascend, transcend and most of all, remember who you really are.

Summer on the Ranch

Sixteen baby Thuja are now planted. They’re secured with sturdy stake and string structure surrounded by chicken wire to prevent critters from nibbling. This will form a windbreak. They are expected to reach at least 30 ft. We’ll keep a close eye on them as they grow; winds out here on the plains can be brutal!

Next we will plant 14 more Thuja, also known as Green Giant, plus 25 hybrid willow. Before that can happen, we will lay out soaker hose to ensure they get plenty of H2O.